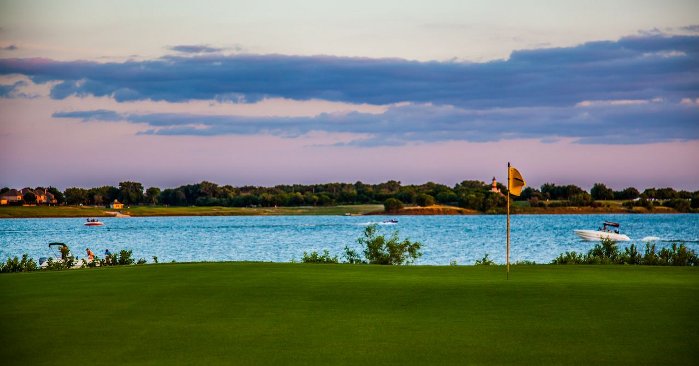 Welcome to links golf Scottish style or, in the case of our group’s recent trip, links golf in the Dallas suburb of The Colony.

The fact that the sustained wind speed and temperature were both in the low 40s was hardly the only reason why we felt we had somehow been transported from north Texas to St. Andrews, Turnberry or Muirfield.

That’s because every hole on the The Tribute Golf Links — part of The Tribute, a 1,600-acre master-planned, resort-style destination community — pays homage to specific famous holes on many of Scotland’s legendary links. The award-winning layout, designed in 2000 by former University of Oklahoma golfer Tripp Davis, features 18 holes framed by wind-swept dunes and sea-washed grasses, thankfully with none of the community’s homes visible. There’s even a 33,000-square-foot English Tudor clubhouse housing the comfortable Old Tom Morris Pub and eight guest suites, in which we stayed for one night. Our group of crusty, well-traveled golfers is a cynical lot. Between us, we have played just about all of the “tribute” courses, so before our round on The Tribute we wondered if the course was filled with dead-ringer Scottish classics or holes more closely resembling those in St. Pete than in St. Andrews. Afterwards, we all agreed the aptly named Tribute is as accurate a representation as you’ll find this side of the Atlantic Ocean.

The 7,002-yard, par-72 (73.2 rating/128 slope) Tribute’s holes include St. Andrews’ Old Course’s famous par-4 17th “Road Hole” (you even must fly your drive over a miniature, billboard-like Old Course Hotel version), along with its breathtaking first and 18th holes, including a walk over the Lone Star State’s version of the Swilken Bridge; Royal Troon’s par-3 fifth “Postage Stamp” hole (I even found the front-left greenside bunker, just as I did when I played the real hole); Carnoustie’s par-5 third hole, “Hogan’s Alley;” plus holes from Turnberry, Prestwick and two from Muirfield, site of the 2013 Open Championship.

The Tribute’s clubhouse — tabbed “Best Clubhouse” by Avid Golfer magazine — boasts the Old Tom Morris pub, which offers a variety of pub grub and fine-dining options created by an award-winning European chef, piped-in bagpipe music, and single-malt Scotch whiskeys, traditional ales and bitters. The comfortable guest suites are each designed, decorated and named after various famous Scottish golf clubs. My Prestwick suite’s amazing view over the course included a spectacular sunset upon check-in after a cold, very cloudy round that day at Old American.

The Tribute’s semi-private neighbor sits astride Lake Lewisville, which is visible from all but four holes. Old American, which is more difficult than the Tribute, debuted in 2010 to plaudits from national golf publications such as Golf Magazine and Golfweek. The course’s naturally formed bunkers are lined with Wilfred Brimley-like mustaches, while native grasses and strategically designed holes leverage the varying wind conditions. In other words, Old American is also a links-style experience without paying tribute to any specific holes from across the pond.

Instead, the 6,920-yard, par-71 monster (74.5 rating/141 slope) is Tripp’s and Leonard’s ode to the “Golden Age of Golf Architecture” period ( 1910-37), and it extends to the entire Old American experience, including the quaint Carriage House clubhouse, 1920s cart barn, screened-in side porch and a new fire pit on the rear clubhouse deck. The designers even utilized an old railroad bridge that previously spanned the Red River connecting Texas with Oklahoma as a way for cart golfers to reach the third tee from the second green.

Davis and Leonard succeeded mightily in their quest to emulate early architecture legends such as A.W. Tillinghast, Seth Raynor, Donald Ross and Perry Maxwell in blending Old American into the land with strategic interest and variety. Preserving the surrounding wildlife and resources were also keys to the design. Native grasses, trees and plants preserve water and create intentional wildlife habitats. You might sight wild turkeys, deer, coyotes and birds of prey such as the Red Tail Hawk, which nests in oaks off the 13th and 16th holes. The full-service Terrace Bistro and Lobby Bar offers three outstanding daily meal menus, and the ultramodern rooftop SODA Bar is a stunning spot to enjoy a few Texas-brewed Shiner Bocks, refreshing cocktails or even a swim in the infinity pool. The popular rooftop overlooks Dallas’ spectacular downtown skyline, whose skyscrapers are alight in color each evening.

Dallas is an unsung golf destination where the Old and New worlds collide. Take it from us — it’s worth experiencing the collision.

• Old American Golf Club and NYLO hotels are offering a stay-and-play package starting at $213 per player, good through summer. It includes one round per player at Old American and one night at any of three NYLO metro locations (double occupancy), including NYLO Dallas South Side. A complimentary yardage book, water, snacks and a pro-shop gift complete the offering, which can be booked for multiple nights. NYLO rooms are reserved online; tee times are booked by calling 972-370-4653. Mention the “NYLO Stay and Play” when booking tee times for additional offerings. Subject to availability, taxes not included in rate above, and tee times are not available before 10 a.m. on weekends.