VIDEO: A dog tried to get Rory McIlroy's headcover 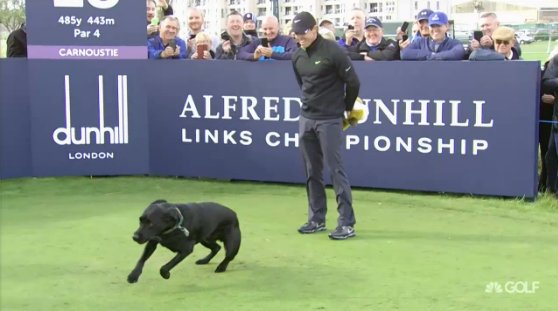 We don't think this is what Tom Watson meant when he was talking about targeting Rory McIlroy at the Ryder Cup. In fact, it's 10 times cuter.

McIlroy was standing on the 18th tee box at Carnoustie during Thursday's opening around of the Alfred Dunhill Links Championship. He was waiting to tee off on the nasty closing hole when, from seemingly out of nowhere, a black lab.

The world No. 1 decided to play with the dog, teasing him with his animal headcover to the delight of everyone.

"Just something to, I don't know, pass the time a little I guess," McIlroy said afterward. "Got my doggy head cover out for him to play with for a little bit which was good fun. ... It's always nice whether we play here at Carnoustie or Kingsbarns or St. Andrews, a lot of people have their dogs out with them on the golf course, and any time I go past one, I try and give it a bit of a pat or a stroke or whatever."

McIlroy shot 1-over 73, leaving him nine shots back of the lead. However, McIlroy has two rounds at Kingsbarns and the Old Course at St. Andrews to get back into things.