Rich Harvest Farms, just outside of Chicago, made  a name for itself as venue for the 2009 Solheim Cup matches. Now the course will have a chance to shine again in the Tour's new international competition.

The course will host the 2016 LPGA International Crown, a new biennial team event set to begin next year at Caves Valley G.C. in suburban Baltimore, according to the Chicago Sun-Times. 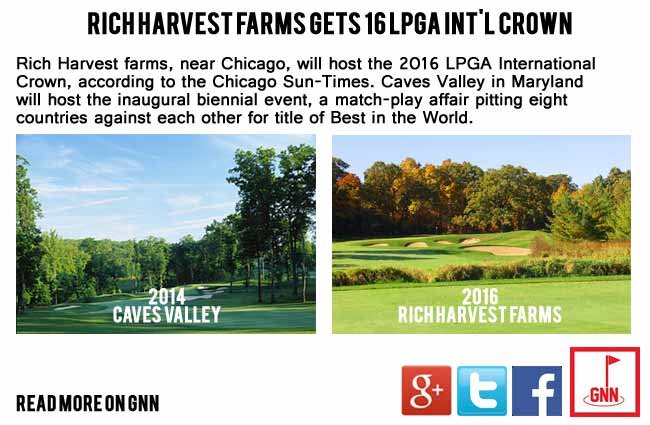 The format for the International Crown is a tournament comprising of four-person teams from eight countries, making a total field of 32 players. The countries that qualify for the event are determined by the combined Rolex Rankings of the four highest-ranked players from any one nation. Right now, South Korea, the United States and Japan are the top three, with Spain a distant fourth. Countries will be separated into two brackets of four countries based on their final standing in the qualification table.

The four-day event will feature three days of four-ball match-play competition, cutting three countries from the equation heading into the final day, which will be individual match play. Points will be awarded for all matches played, with the country tallying the highest four-day total declared champion.