US stretches lead to 6-2 at Ryder Cup 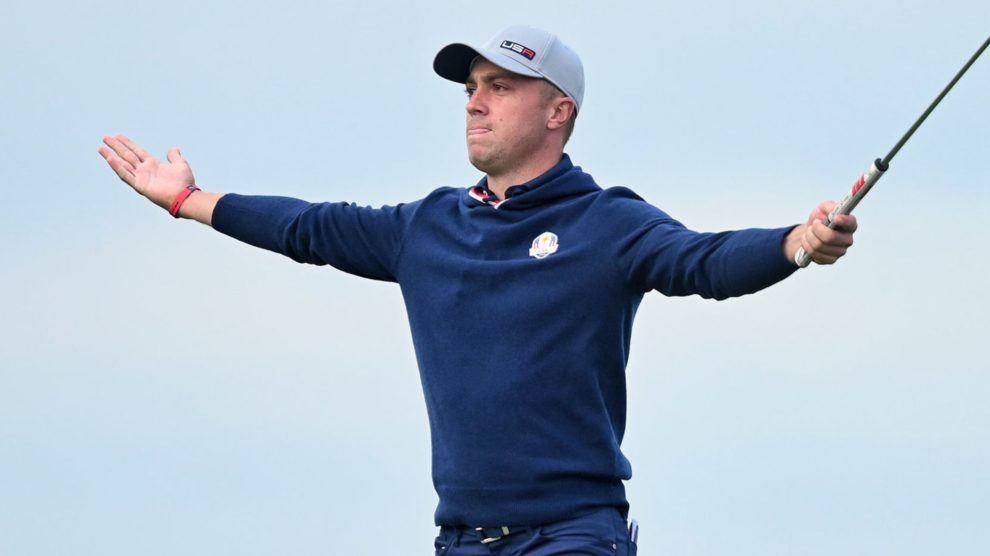 Friday marked the first time in Ryder Cup history that there was no repeat pairings on either side in the afternoon fourball. If these went wrong, US captain Steve Stricker was opening himself up to plenty of second guessing, but the Americans just kept on rolling. The young guns came through for the Americans, as the US rookies went 8-0-2. 11 American players earned at least half a point Friday, matching a single day record first set in 1977.

Schauffele came out hot with birdies at 3 and 4 as the Americans took a quick 2-up lead. Wiesberger got one back with a birdie of his own at the sixth and Casey added another as the match went to the back nine All Square.

Then it was DJ’s turn to heat up with three straight birdies to open the back nine as the Americans quickly regained their 2-up lead. Wiesberger and Casey didn’t have another comeback in them as the US team hung on for a close victory.

“It's always a nice thing being on DJ's team when he's free-rolling. I've seen it before playing against him, and it's not as fun. Nice to be on his side when it's happening,” Schauffele said.

Match Takeaways: The US was a bigger favorite in this match than any other Friday afternoon, and they took care of business. It’s hard to beat a four ball team that includes two of the top-5 players in the world, and Schauffele and Johnson never trailed. Schauffele has been rock solid in his Ryder Cup debut and Johnson’s putter is starting to heat up, which could give the Europeans nightmares over the weekend.

This was the one match of the session that Europe entered as sure favorites as a McIlroy/Lowry team looked like a strong one. They didn’t account fo Tony Finau however. They halved the first four holes before the Europeans drew first blood, but then Finau heated up.

He made birdie at the 6th to square the match again, then English added a birdie at the 8th as the US took the lead. Three more back nine birdies led to a decisive American win.

“We both looked at each other and knew just keep on piling on these birdies and keep on piling on looks, and we're going to be hard to beat. We were able to get it done and ride the momentum in the middle of the round,” Finau said.

Match Takeaways: This victory was almost a bonus for the US, as the team of Finau and English was the weakest of the day on paper. But they stepped up in a big way to earn a point that gave the Americans even more momentum. Friday marks the first time that Mcilroy has lost both sessions in the same day, and he’s earned just two points in his last eight Ryder Cup matches.

A lot was made leading up to this event of who was going to play with Bryson DeChambeau. Ryder Cup rookie Scottie Scheffler got the call and the duo delivered, taking down the number one player in the world.

The match was All Square thru 7, and the teams split the subsequent four holes and the match remained tied thru 14. Scheffler made a clutch birdie putt at the par 5 16th to keep the US 1-up. After a halve at 17, Rahm and Hatton each hit spectacular shots into 18 and Hatton poured in his birdie putt to steal a half point for the Europeans.

The most memorable highlight of the match was DeChambeau’s 417 yard drive at the par 5 5th. He had just 81 yards left for his second and stuffed a wedge for a tap-in eagle.

“I knew if it was a little downwind, I could take a unique line, and I luckily was able to have that wind today,” DeChambeau said. “It was 20-plus, and I said to myself, all right, I have to aim at the green, so I did. So I just aimed at the green and bombs away.”

Match Takeaways: Talk about a match the Europeans needed to at least tie, as they would be in real trouble had the US secured a full point. Rahm put the team on his back Friday, showing everyone why he’s the best player of the world. It felt like he made every putt he needed to make, and Hatton picked him up when he needed to, particularly the huge birdie at 18.

Thomas and Cantlay won the first hole but the Europeans won four of the next six holes to go 3 up thru 8. The Americans slowly began to rally, winning the 9th and the 12th as the European lead was cut to just 1 up.

Fleetwood drained a huge par putt at the 15th to maintain the lead, but the Americans weren’t done yet. Thomas hit a frozen rope fairway wood into the par 5 16th and Fleetwood hit a violent hook into Lake Michigan.

Thomas drained a huge eagle putt to tie the match and goes crazy, firing everybody up. They halved 17 and went to the last All Square, and another huge halve at 18 for Europe salvaged a half point.

Match Takeaways: Another match that Europe desperately needed to grind out at least half a point, and Hovland and Fleetwood got it done. Thomas and Cantlay made a huge comeback after being 3 down thru 8 and looked poised to blow the competition open down the stretch, but the two sides were evenly matched throughout.

Thomas has become one of the main leaders of the US team, and he let everybody know it. He wasn’t afraid to show his emotions—he definitely led the team in Strokes Gained: Fist Pumps.

TIED going into the 17th!

“I've lost a bit of my voice. I was yelling a little bit. That's what this event is all about,” Thomas said. “I mean, to have the opportunity to go out and battle like that with Patrick, we've played a lot of golf together over junior years, amateur years, college, professional, and for me to be able to pull one for him, making putts, and vice versa, it was fun.”

It often seems logical to group like-minded players together, but the Thomas/Cantlay pairing is a good example of why players who’s demeanors could not be more different can also be successful.

Session Takeaways: The US has traditionally struggled in the second session even after a good performance in foursomes, but they kept their foot on the gas this time. We knew coming in that Jon Rahm and Rory Mcilroy needed to have huge weeks for the Europeans.

Rahm has delivered, helping earn all 1.5 points for the Euros Friday, but Mcilroy struggled, losing both of his matches. The 6-2 US lead thru two sessions is the largest in 46 years.

The United States leads 6-2 after the second session. It is their largest lead after day 1 since 1977, the last Ryder Cup before the other side was expanded from just Great Britain & Ireland to all of Europe.

Mcilroy however isn’t counting his team out after a tough day.