The best PGA Championship venues for any occasion SPRINGFIELD, N.J. – When the tempest breaks at a major championship, it tends to do so with Olympian fury. A bar sinister moves across the sky with a rapidity that seems incredible. The clouds turn black, then green, convulsing all at once into a washing machine in the sky. Then the wind’s voice rises with growing fury.

That’s what we’re waiting for at Baltusrol. We were fortunate to avoid it Thursday, when it seemed at any moment we could have been slammed. But Friday and Saturday are when the thunderstorms are expected, so while we batten down the hatches, let’s take a tour of PGA Championship venues – the great, the fun and the head-scratching. BEST THAT ALSO HOST OTHER MAJORS

All quintessential major championship venues: between them 44 major championships. With the exception of Pebble Beach, the other three courses have between them exactly two water hazards, both at Oakland Hills. When the PGA comes to these venues, scores tend to be lower than when they host Opens, but Oakland Hills only surrendered 3-under to Padraig Harrington in 2008, and if a tempestuous downpour hadn’t softened the course, we would have seen an over par winner for certain. Players couldn’t keep tee shots in the fairway, and the length of the rough would have made former U.S. Open set-up man Tom Meeks proud. You could have lost a back hoe in it, it was so long.

One of the majors needs to come back to Oakland Hills sooner rather than later. It’s a Midwest venue, it has room for everyone and everything, it’s easy to get to, and it can host a major in a heartbeat if necessary. You also have to love that the course sits at the intersection of Telegraph Road and 8 Mile Drive.

You also have to wonder why the PGA Championship has never come to The Olympic Club. It has all the same pluses at Oakland Hills, and it gives the PGA of America a West Coast venue. What’s not to like? Baltusrol is growing on me. It has an asymmetrical routing. It has interesting greens. There’s more original Tillinghast architecture here than there is original Donald Ross architecture at Oak Hill. Plus Balty has the mountain frowning down on you, and with the rambling, gargantuan Tudor clubhouse, it’s a hell of a setting. Plus we can always ***ROLL*** out the ghost of Old Baltus for a colorful feature article when we come to visit.

Riviera is perfect for the PGA of America. Who cares that it hosts a tournament earlier in the year? It blows Quail Hollow away, and we’re going there in 2017. Ocean views, great design, dramatic history and a broad popularity with golf fans – Riviera has it all.

Southern Hills brings to a rousing crescendo the stage of architect Perry Maxwell’s career before he joined forces with Alister Mackenzie. It has excellent green complexes and deep, treacherous bunkering. There’s just one problem with Southern Hills... 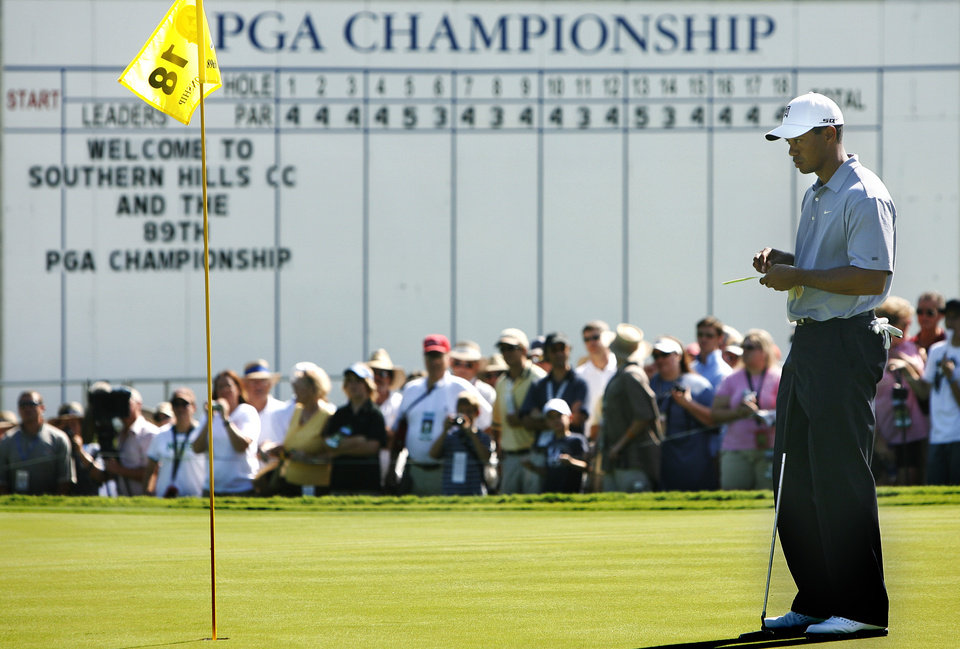 Already known for the infamous “Blast Furnace Open” of 1958 won by Tommy Bolt, temps reached 104 during the week of Tiger Woods’s fourth and final victory in the PGA Championship. Start hydrating a year in advance if they ever come back.

Baltusrol, Pecan Valley and Dallas Athletic also all saw temps in excess of 100 degrees. The humidity of New York/New Jersey in August made it feel more steam room than sauna, while he dry heat of Dallas made the Wanamaker Trophy so hot, Jack Nicklaus had to use a towel to hold it at the victory ceremony. Meanwhile, seminal writer Dan Jenkins had the best line about the heat at Pecan Valley: “The Alamo melted into a Taco Bell.” 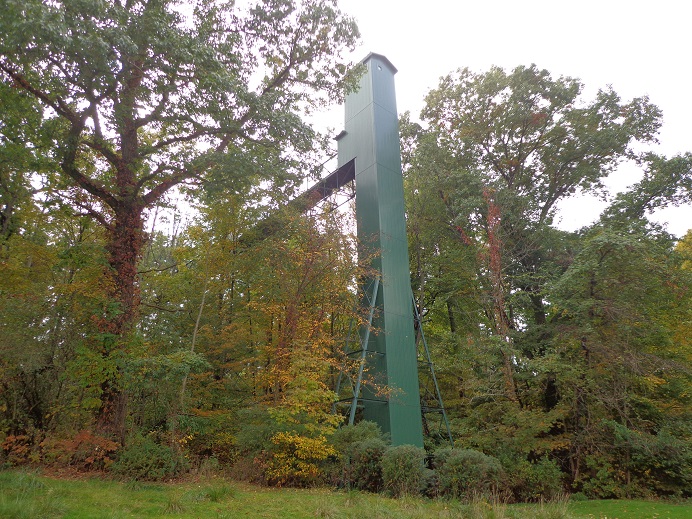 It’s a shame Baltimore is such a mess right now, because it’s a great sports town otherwise. But while I loved eating a crab cake sandwich at Camden Yards, I wasn’t thrilled about having to avoid young punks on bikes with guns to get to my car.

Five Farms is exquisite, though - a Tillinghast masterpiece (we all know how much majors love Tillinghast courses) that hosted the 1928 PGA won by Leo Diegel as well as three Senior Players tournaments from 2007-2009. The par 5s are both showstoppers, including the famous “Great Hazard” hole, routinely selected as one of the great par 5s in all of golf.

Diegel, incidentally, broke Walter Hagen’s streak of four consecutive wins at the PGA. He didn’t get the Wanamaker Trophy that day...the Haig said he’d lot it some time earlier. Later on, construction workers found it in the basement of one of Hagen’s equipment warehouses.

Pittsburgh Field Club is another superb Tilly design recently restored by Keith Foster, the same man who won a boatload of awards for his renovation of another Tillinghast masterpiece, Philly Cricket Club. Talk about interesting, quirky architecture! Holes cascade down a hundred feet from the clubhouse, then slowly spiral back up, winding their way around until they reach the 17th green, where players take an elevator 20 feet up the mountain to the 18th tee box, and the closing par-3, another interesting architectural anomaly that works quite well. Denny Shute won there in 1937, for those of you scoring at home.

You can park your car on site and walk mere steps to the gate. None of this 90-minute shuttle crap. Hazeltine gets the first nod because everyone is so “Minnesota Nice!”

They all suck. They’re the three heads of Satan in the lowest ring of Hell in Dante’s Inferno, forever feasting the torsos of betrayers and mutineers. Valhalla is carnival-barker screwy, with moats, island fairways and right-angle dog-legs. Atlanta Athletic and Medinah are wet, boring, tree-lined slogs. Phil Mickelson once asked who would ever want to be a member of Atlanta Athletic Club, because you are hitting 200-yard carries over water all day. And Medinah, on the shores of Lake Forgettable, with its hazards lined by a hot mess that looks like a Frank Geary corrugated metal art deco statement, has been repeatedly voted the most overrated course in America by every major magazine in the country. “What? No Quail Hollow?” you ask. Once again, I’m the minority report. The fact that the goodie bags and amenities are staggering does not, to me, overcome the drawbacks of the golf course. Too long, too much water, too narrow, too green, too overrated, and too bad we’re not playing Oakland Hills instead.

Of the future venues, Baltusrol has the most pluses. It’s the best golf course except for Kiawah Island, it’s convenient to get to for fans, and it has the best history.

As for the rest, Harding Park is much improved, and a week in San Francisco has many positives, not the least of which are the golf courses: Califormia Golf Club of San Francisco, Olympic Club, San Francisco Golf Club, Lake Merced, Presidio and Lincoln Park are all in town. As a bonus, you can take in a Giants baseball game. Pitcher Madison Bumgarner is worth the price of admission.

I hesitate to pick Bethpage because we’re going to have to deal with liquored up, lathered-up fans running amok. It will be far worse for the Ryder Cup, which could become a jingoistic mess if people aren’t made to behave themselves to a reasonable extent.

As for Kiawah, if they don’t fix the transportation situation and find a way to get people there and back faster, don’t bother going. You aren’t paying $125 a day to sit on a bus for as much as six hours to go 12 miles.

It did, however, give us the funniest witter exchange in golf:

Alan Shipnuck: “And now my shuttle bus has broken down.”

THREE PLACES THEY SHOULD GO

They said they wanted to try an offshore venue some time, and they love Pete Dye golf. Both Teeth of the Dog and Dye Fore are among the world’s greatest courses. Cypress Point used to co-host a PGA Tour event, while Philly Cricket is being groomed to host a PGA Championship. (It’s thought that this year’s wildly successful Senior Players and the 2015 Club Pro Championship were a dress rehearsal.) It will also host the 2020 U.S. Amateur Fourball. I see a bidding war in the future between the PGA and the USGA maybe?

IF THEY EVER WANT TO TRY MATCH PLAY SOMETIME

All great golf architecture in America can point to NGLA for its genesis. Garden City is one of the great match play venues on the planet with its long list of “half-par” holes. Mike Strantz-designed Tobacco Road was voted the most adventurous course in America, and everyone can stay at Pinehurst for the week.