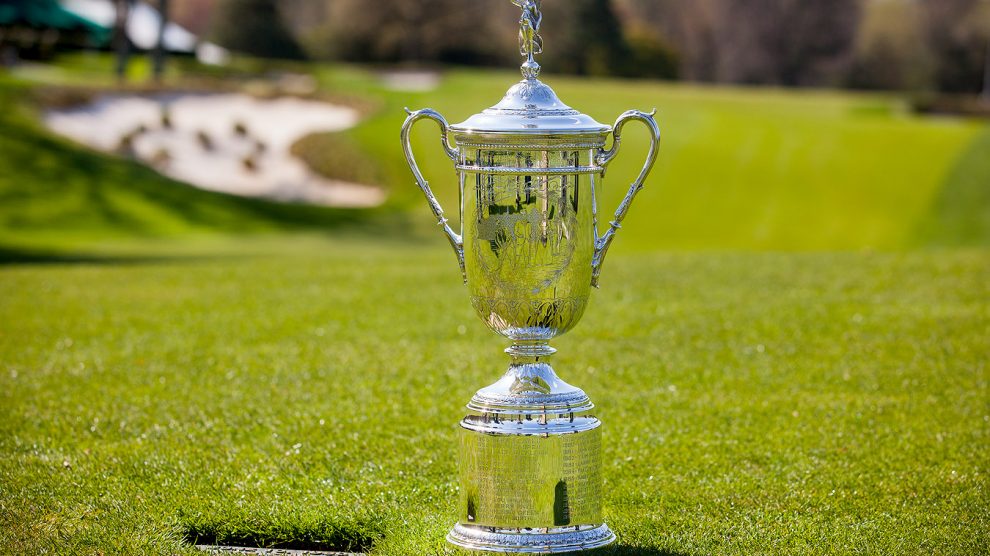 The U.S. Open Trophy is one of three trophies in men's major championship golf that isn't named after a person. The Masters Trophy and the Claret Jug are the others, while the Wanamaker Trophy has a namesake.

The U.S. Open trophy, as you'd guess, is awarded to the winner of the United States Golf Association's (USGA) United States Open Championship, the formal name for golf's toughest test. It's a silver trophy that has two handles on the sides of a silver jug on top of a silver base. On one side of the trophy is an engraving of the words "United States Golf Association Open Championship." Beneath it, an engraved laurel wreath wraps a scene of four golfers. The lid of the trophy is topped by a winged, female figure representing victory.

The trophy is 18 inches tall, 6 inches wide and weighs approximately 8.5 pounds. The names of U.S. Open winners are engraved around the base.

The USGA first awarded the current version of trophy in 1947. It's actually a replica of the original U.S. Open trophy, which dates back to the first U.S. Open in 1895. Gorham Company created the original.

U.S. Open winners get to hold on to the U.S. Open Trophy for one year, and then they return it to the USGA ahead of their title defense. The champion gets a gold medal, named the Jack Nicklaus Medal in 2012, as a permanent trophy. Winners and host clubs can also order one replica trophy each from the USGA.