Where does Donald Trump stay when he's at Trump National Golf Club in New Jersey?

President Donald Trump has spent plenty of days since becoming the 45th President of the United States on Jan. 20, 2017, at his Trump National Golf Club in Bedminster, N.J. He scheduled a 17-day vacation in August 2017 at that 36-hole facility which hosted the U.S. Women's Open the prior month, staying up there while scheduled White House renovations were completed. He continues to spend extended time at the club in each August of his term, and he spends other summer weekends there.

However, it's kind of an awkward place to live. It is a country club after all. It has members. It has golfers constantly on the grounds. It's not really like living in a house so much as an upscale condominium complex with one person. So, when Trump became President and needed to figure out a way to live comfortably at a place reasonably close to his New York City Trump Tower penthouse, he figured he should shack up at Trump National in New Jersey.

In making that decision, Trump had to redesign a living quarters he already used for summer getaways (Ivanka and Jared have a separate cottage with more than 2,000 square feet of space). President Trump stays at a cottage right next to the club's pool, per Alan Shipnuck of Sports Illustrated, and that cottage was expanded by 500 square feet after getting approval from Bedminster local government to add a second-floor balcony and a porch. 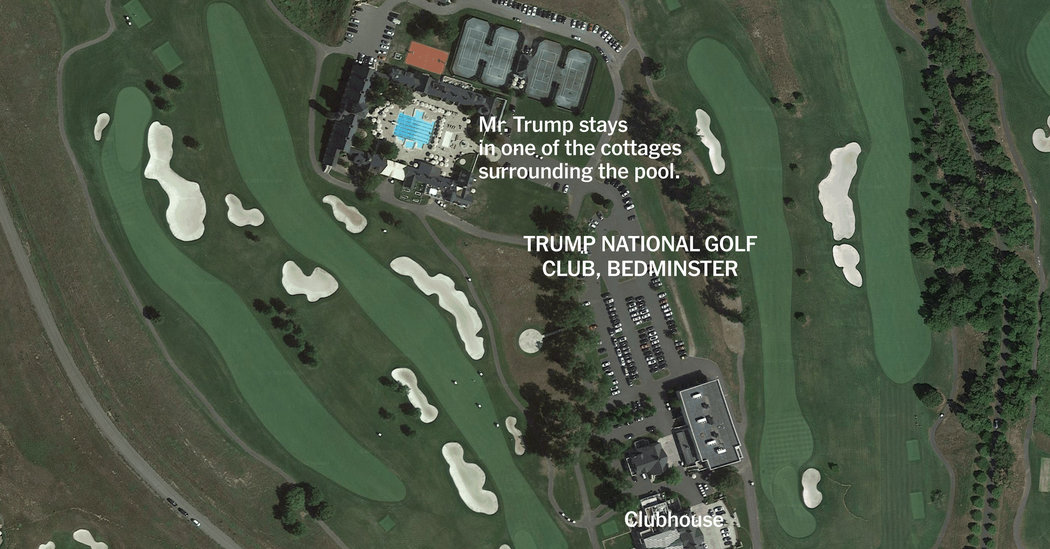 There are five other multi-bedroom cottages and 11 suites for members and guests to rent at Trump National Golf Club in Bedminster.

Secret Security detail, often wearing nice sport jackets to fit in with the club's vibe, control the perimeter of the property, though Trump is not shy about walking around the clubhouse and playing golf on the club's two courses. He frequently interacts with members and guests on the grounds as well.

All of Trump's visits to his golf courses and clubs and other properties cost substantial money to the American taxpayer. The Secret Service is required to protect Trump and his family with almost no regard for budget, which is approved by Congress. When Trump goes to his private properties, Secret Service is required to secure the property and protect him, often requiring much more resources than at The White House.

Congress approved $41 million to cover the cost of Trump's travel and protection from Jan. 20 through Oct. 1 in 2017, the beginning of the new federal government fiscal year. (That was in addition to another $27 million approved for the period from the election to inauguration.) Most of this money was spent in New York City, which spent six figures daily to protect the President's wife and son when they were in the city before relocating to The White House. Over the course of a full year, at $161,417 per day, Trump's travel and protection costs Americans $58.1 million per year. However, the expenses run higher than that based on current estimates, meaning municipalities and states are eating the cost, including to police detail and others who provide added layers of security and traffic management.