The 10 longest drives in PGA Tour history measured by ShotLink

What's the longest drive in PGA Tour history? The answer to that depends on who you believe and what you count as a measured drive. There are actually three answers to that question, and one is Tiger Woods.

The longest drive in PGA Tour history, technically, is a 787-yard drive hit in the 1992 Texas Open by Carl Cooper. Cooper's tee shot on the par-4, 456-yard third hole hit a downward-sloping concrete cart path way right of the fairway and took off, ultimately going 787 yards and stopping behind the 12th green at Oak Hills Country Club. Cooper took another three shots to get back to the green, then two-putted for a double bogey.

Another longest drive in PGA Tour history is credited to Mike Austin, 64 years old at the time, who hit a 515-yard drive on Sept. 25, 1974 in the National Seniors Open Championship, the pre-cursor to the U.S. Senior Open. Austin hit the drive on a 450-yard par 4 at Desert Rose Golf Club in Las Vegas. The club was at 2,000 feet above sea level and the estimated wind on the hole that day was a 35mph helping wind.

The modern record in the non-cart-path division, however, belongs to Tiger Woods. Since 2000 in a limited capacity before being expanded in 2003 for all tournaments, the PGA Tour has used ShotLink to measure every shot hit on the PGA Tour, doing so with a laser-based system that offers precise measurement on every hole -- something not previously possible. Back in 2002, Woods hit the longest drive in PGA Tour history recorded by ShotLink, a 498-yard blast on the par-5 18th on the Plantation Course at Kapalua Resort in Hawaii during the Tournament of Champions. As it turns out, the 11 longest drives in PGA Tour history were hit on that hole, including 10 in that 2002 edition of the then-Mercedes Championships.

However, since we first published this post, the PGA Tour has revised the figures from the 2002 Mercedes, dropping 27 drives from that tournament off the official record. The official longest drive in PGA Tour history belongs to Davis Love III, who hit a 476-yard drive on No. 18 at Kapalua's Plantation Course in the 2004 Mercedes Championship. The longest recorded drive is Dustin Johnson's 489-yard drive in the third day of match play in the 2018 WGC-Dell Technologies Match Play, but stats for the match-play event are unofficial and don't count toward historical rankings. 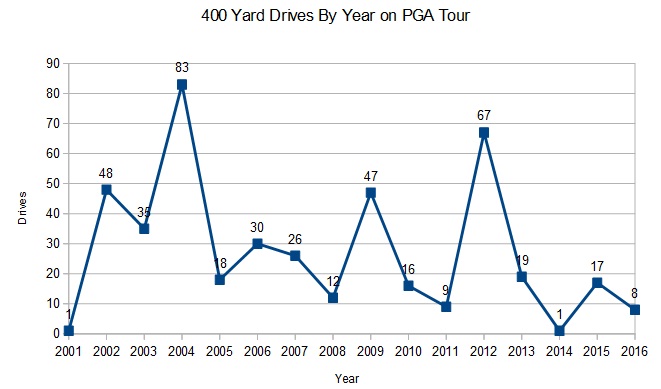 Kapalua's Plantation Course has given up the overwhelming number of 400-yard-plus drives in PGA Tour history. In the history of the PGA Tour's use of ShotLink through 2016, there had been 410 (was 437) drives of 400 or more yards dating back to Casey Martin being the first to do it in 2001. Of those 410 drives of 400 yards or more, 236 were at the Plantation Course. Another 56 have come at Firestone Country Club's South Course, home of the WGC-Bridgestone Invitational. Another 41 came at LaCantera Country Club, former home to the Valero Texas Open. Three courses account for 330 of the 437 400-yard-plus drives in the PGA Tour's history of using ShotLink.

And while Tiger Woods has the longest recorded drive in PGA Tour history with ShotLink, he has just six total 400-plus-yard drives in his PGA Tour career.