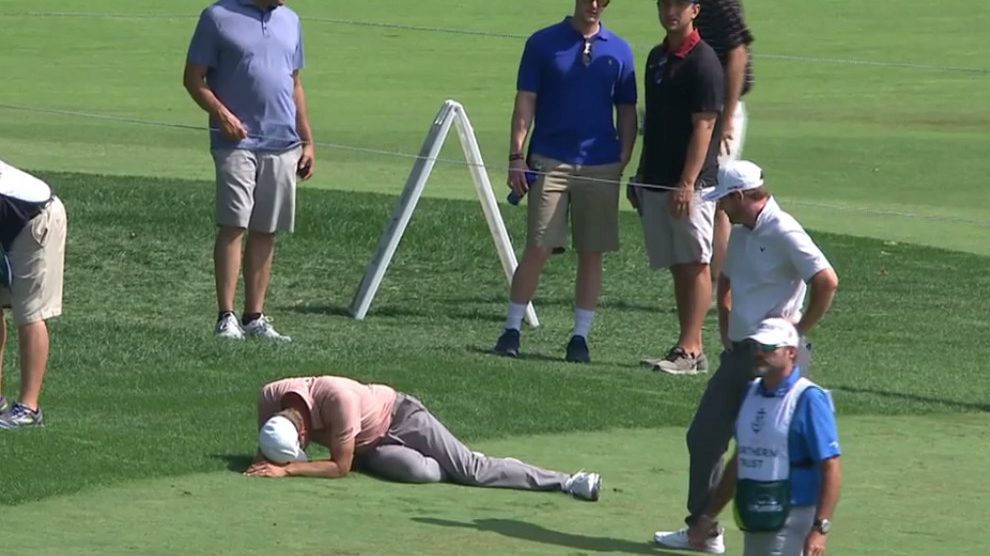 Lucas Glover quickly fell to the ground playing the 18th hole on Saturday in the third round of the 2017 Northern Trust.

Lucas Glover has been diagnosed with a strained patella tendon.

He plans to tee it up in tomorrow's final round @TheNTGolf. pic.twitter.com/TS9UKwGH31

As Glover was hitting his second shot from a sidehill lie into the final green, Glover's back leg slipped and gave way, forcing Glover lead leg to shoulder the load of the swing as he tried to regain his balance and finish hitting the ball.

Glover immediately went to the ground in the fairway and remained there as emergency medical personnel came to the 2009 US Open winner to treat him and look at his knee. Glover remained there for more than 20 minutes as a group played through while he received medical attention.

Through 17 holes on the round, Glover was 1 over par. He eventually got off the ground and hobbled slowly down the fairway in an effort to finish the round. He made bogey to shoot 2-over 72.

After the round, Glover, who walked off the 18th green using a wedge as a makeshift cane, was diagnosed as having a strained patella tendon. He intends to finish the tournament on Sunday.

Lucas Glover walking gingerly down the steps. Beats the alternative of a stretcher pic.twitter.com/7NkEpS7M7g

Coming into the first leg of the FedEx Cup playoffs, Glover was No. 55 in FedEx Cup points and comfortably into the second leg of the playoffs for the top 100 players at the Dell Technologies Championship.