Who is Andrew Johnston, and why is he nicknamed 'Beef'? Over the course of the final two days of the 2016 U.S. Open, you're going to hear the Fox Sports announcers and a lot of the fans at Oakmont Country Club saying the word "beef."

And they're not talking about dinner plans.

They're referring to Englishman Andrew Johnston, who goes by the nickname "Beef." Beef Johnston played his way into the U.S. Open through a sectional qualifier in England, just weeks after notching his first European Tour win in very difficult conditions at the Spanish Open.

After he won, Johnston said he couldn't wait to get home and get "hammered." And that's precisely what he did, inviting friends and family to the celebration, as well sharing video of the party on social media.

It's hard not to notice the 28-year-old, ranked 105th in the Official World Golf Ranking. He's a bigger guy, and he's grown out a bushy beard.

So why is he called Beef? Well, as he wrote for Golf Digest:

I was 12 years old and walking down the 11th hole at North Middlesex Golf Club, which is still my home club today. A friend, Mark Kinsella, was walking up the 18th and, seeing me from a distance, shouted, "Look at you. It looks like you've got a steak on your head. A bit of meat. You've got a beefhead." By the time I got in, everyone was calling me Beefhead, which was quickly shortened to Beef.

Beef embraces his nickname. He even has a tattoo on his shoulder that he calls a "drunken mistake" that says "Beef Head". In fact, the nickname has taken hold, as some of the U.S. Open tournament volunteers put up his name as Beef on the leaderboard in the Wednesday practice round. 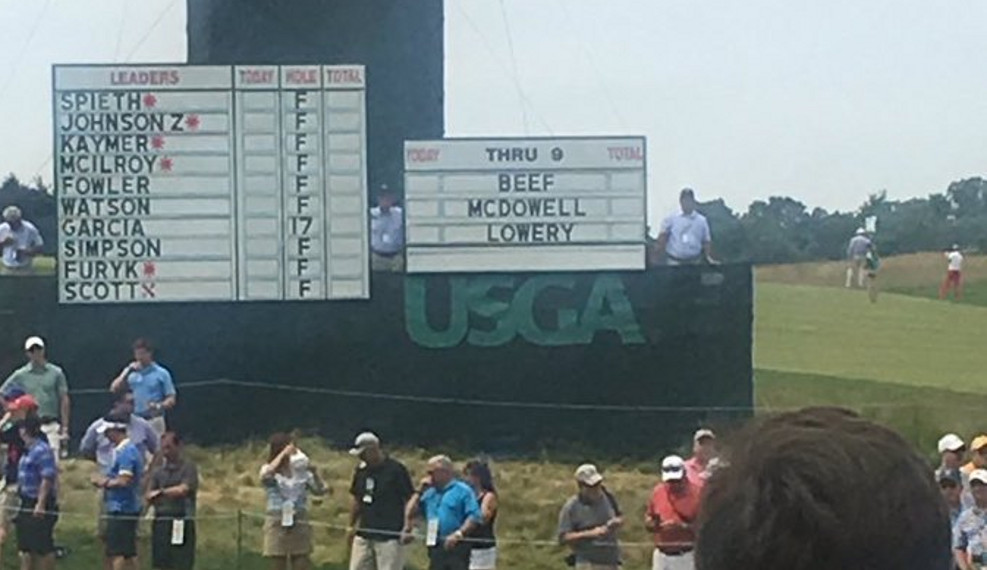 Beef has cuts of meat stamped on his wedges. He's teed off on a hamburger for a magazine photo shoot. The European Tour gave him a parking space reserved for Beef!

Heading into the final round, Johnston is in position to spoil the party at the 2016 British Open Championship.