These are the worst golf clubs of all-time -- no, really "The instant! automatic! answer to all your short game problems..." that is the XE1 wedge comes immediately to mind. And then, on Saturday during the WGC-Cadillac Championship, I saw something that topped that hunk of junk as the most ridiculous golf club commercial I've ever seen: The Royal Treatment golf clubs.

The name is as good anything. The Royal Treatment? Is the 7-iron like a reverse UroClub that acts like an on-course bidet?

I thought Parsons Xtreme Golf was a long name, but at least it has golf in it. The Royal Treatment sounds like the name of a spa at a cheesy Arthurian themed golf course -- like the place a pyramid-scheme sucker pays to send his third wife goes while he uses a Groupon on a $20 green fee.

Alright, so the clubs. It took Jack Charles and his supposed partner, actress Donatella Pecci-Blunt, whose American film credits include 1996's "3" and that's it, two years to develop these clubs for their lifestyle club. AND THERE ARE ONLY 10 CLUBS! There are 14 in a golf bag. So, The Royal Treatment means getting shorted four freaking clubs?!

The fairway wood is named "John Jumano" after, according to their website, "JACK CHARLE’S NEW SOON TO BE BLOCK BUSTER MOVIE" (sic) -- apparently one of two in production. Sure. The 5-wood is named after "Titanic Johnson," the other pending blockbuster. For some reason, the 3-wood has an "energy-filled" ball bearing built into its design. The 5-wood has two! I guess so you can spin the bearing while you're waiting for your indentured servant -- or a caddie -- to stop laughing at you for playing these garbage clubs.

And then we get into the irons and the secret of how you're gipped out of four irons. They're all combo irons! And it starts with a combo 1-2 iron, bringing together the confidence-destroying, difficult-to-hit 1-iron and the quickly disappearing 2-iron. Genius! The good news is that this club comes free if you're dumb enough to buy the other six combo irons.

Oh, wait, the next club is inexplicably a 3-4 hybrid. 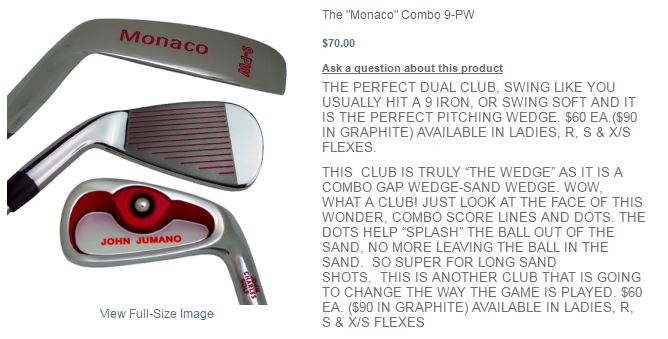 If you stay at the right hotel, you can get one of these bad boys for free.

And then when I need to hit a 7-iron, I'll just use the 6-7-iron. I hope there's a forthcoming 9-putter combo. No? Just the 9-iron and pitching wedge mutation?

"THE PERFECT DUAL CLUB, SWING LIKE YOU USUALLY HIT A 9 IRON, OR SWING SOFT AND IT IS THE PERFECT PITCHING WEDGE."

Why am I doing this instead of just getting 14 clubs and swinging a damn pitching wedge?!

I've never heard of a combo gap-sand wedge. A sap wedge, I guess. On the bottom half of the face are indents that look like the sand wedges from the turn of the 20th century -- you know, the kind Gene Sarazen invented or an even crappier Alien wedge. On the top half? Traditional grooves, cause why not?

And there's the driver. Oh, the driver. According to Jack Charles, it's filled with foam and cork. He may as well have filled it with Zika because that packs more of a punch than foam and cork. A mercury alloy would've been a better idea. If you really want to live The Royal Lifestyle, though, there's a second driver offering. It's called the Wow driver, as in, "Wow, where did my life go wrong?" It's made of "pure Russian titanium," has the requisite ball bearing in the sole and is 46 inches long. It retails for $335, which gets you a good way toward a full frontal lobotomy.

I'm so angry that the stock offering on these clubs isn't The Royal shaft.

And who the hell is this guy demonstrating the clubs in action? Jack Swing? We're all clued in at this point that this thing is a big scam, but the least they could've done was use a fake royal name for the guy. King Bogey VI. Something.

The nice thing is that the clubs are priced on a sliding scale:

All told, $765 or so for a 10-club set. I would honestly rather buy a set of counterfeit clubs and cross my fingers.

This has to be a joke with the appropriate punchline: THE ARISTOCRATS!