PGA of America president Ted Bishop came to Nick Faldo's defense in an ongoing public spat with fellow Englishman Ian Poulter. Unfortunately for Bishop, the language he chose now has him on the defensive.

Bishop, who spent Thursday with Faldo at an event, sent a tweet and shared a post on Facebook in defense of the six-time major winner on Thursday, suggesting Faldo's superior resume trumps Poulter's, calling him a "lil girl" in the process. 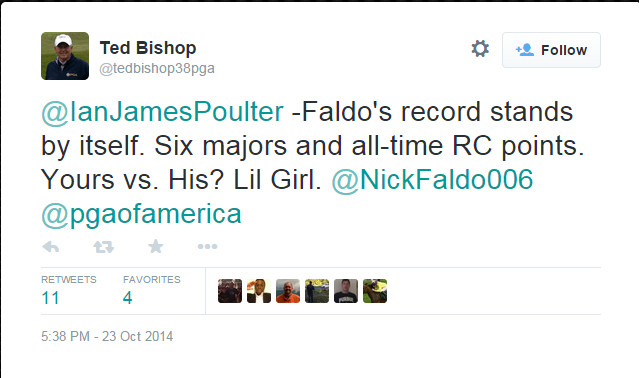 @IanJamesPoulter -Faldo's record stands by itself. Six majors and all-time RC points. Yours vs. His? Lil Girl. @NickFaldo006@pgaofamerica

He offered a similar sentiment on his Facebook page, saying:

Used to be athletes who had lesser records or accomplishments in a sport never criticized the icons. Tom Watson (8 majors and 10-3-1 Ryder Cup record) and Nick Faldo (6 majors and all-time Ryder Cup points leader) get bashed by Ian James Poulter. Really? Sounds like a little school girl squealing during recess. C'MON MAN!

The remarks are especially disappointing from Bishop, whose term as president ends next month, considering his role in the PGA of America and LPGA combined to form a new major championship, the Women's PGA Championship, to start next year in replacement of the long-standing LPGA Championship.

Poulter was critical of Faldo in a chapter of new autobiography, "No Limits," for calling Ryder Cup teammate Sergio Garcia "useless" during the 2008 Ryder Cup. Garcia played poorly in the '08 matches at Valhalla and had been dealing with a break-up with Greg Norman's daughter, Morgan Leigh. Faldo later apologized for the remark.

In his book, Poulter wrote:

Sergio puts a brave face on it but the rest of the guys are fuming. I’m shocked that he has said it. It’s highly disrespectful. It’s a cheap shot and it’s the worst possible timing.

Faldo might need to have a little look in the mirror. I have always got on great with Faldo in the past and I have a great deal of respect for everything he has achieved but this feels like sour grapes. It feels like a guy who is still bitter that he lost in 2008.