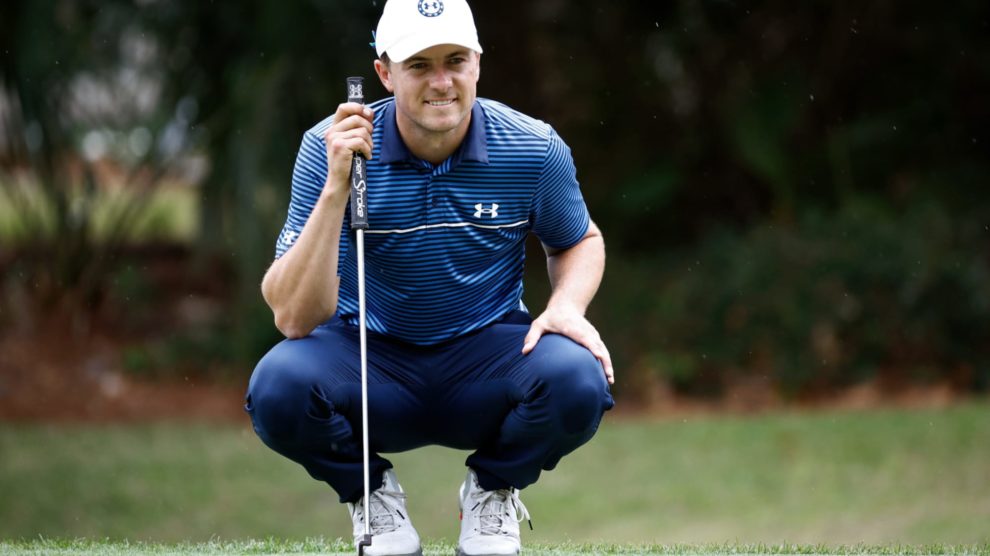 In just about 24 hours, Jordan Spieth went from sharing the lead at the 2023 Sony Open in Hawaii to missing the cut at Waialae Country Club in Honolulu.

That's a rare feat on the PGA Tour, and it's definitely one he didn't want to accomplish.

On Thursday, Spieth opened the first full-field event of the 2023 PGA Tour year with a 6-under 64 that was good enough for a share of the first-round lead with Taylor Montgomery and Chris Kirk. Playing was suspended on Thursday due to darkness, and the players who still needed to finish Round 1 came back on Friday morning to complete play while the second round got underway.

When Spieth came back to play his second round, whatever went right on Day 1 went the other way. Spieth shot 5-over 75 to drop from being in a tie for first to slamming his RV door shut and heading home.

Spieth's round got off to a bad start, with a bogey on the par-4 second. He leveled with a birdie at the par-3 fourth, and then he never made another birdie the rest of the way. Five more squares on the card -- including four in a row from hole Nos. 8 through 11 -- paper-cut Spieth down beyond the cut line of the top 65 players and ties.

Even still, Spieth could have made the projected weekend cut of 2-under total if he could have birdied the par-5 finisher on the Seth Raynor design. After a ruling, Spieth still wound up making a par.

The three-time major winner said he didn't play much differently than Thursday. He just wound up on the wrong side of variance, perhaps.

"Made a couple really -- made a couple bad swings from off the tee," he admitted. "Other than that, I didn't play that different. I just ended up a foot into the rough here, right behind a tree here. It was a weird, weird day. Left like six or seven putts short. Thought the greens were going to be faster and left six or seven in the heart within a foot short."

"This sucks," he said. "I mean, I've never led a tournament and missed the cut before. It's not like I wouldn't have replayed anything. I made a bad swing; didn't really make any bad decisions. Just got just the ball in the wrong spots at the wrong places, and out here you just have to be fairway, fairway, fairway.

"I just didn't drive it as well today."

It is exceedingly rare for a PGA Tour Round 1 leader or co-leader to wind up missing the cut after the second round. The last player to do it was Matt Every at the 2020 Arnold Palmer Invitational -- the final full event before the COVID-19 pandemic started. Some are more memorable than others, including Keegan Bradley at the 2016 Valspar Championship and Camilo Villegas at the 2013 Honda Classic. Rod Pampling did it in 1999 at the Open Championship, and he tweeted in response on Friday night a warm welcome to the Leader to Miss the Cut Club.

Adding insult to injury, Spieth still hasn't technically missed the cut. Friday's second round was also suspended due to darkness, just like on Thursday. With at least 76 players at 2-under 138 or better through 36 holes, there's no chance Spieth's 1-under total will move onto the right side of the cut. Spieth won't technically miss the cut until play is completed on Saturday morning.