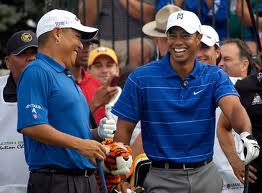 Philadelphia, don't think you're all that special.

Yeah, a suburb of yours is hosting the 2013 U.S. Open. Sure, Tiger Woods called you a "great sporting town" in his Tuesday news conference at Merion Golf Club.

But Tiger says that about a lot of places.

In fact, Woods has called three other cities "great sporting towns" -- maybe more, but a rudimentary Google search provided all of the information needed to prove the world No. 1 is just laying on the Cheese Whiz.

Here's precisely what Woods said Tuesday: “This is one of the greatest sporting towns in the country."

Unfortunately for you, Philly, Woods has said that about a lot places.

Of Chicago last September at the Ryder Cup: "This is a great sporting town, to begin with, and they obviously have supported the Cubs, White Sox, Bulls, Blackhawks, you name it. They just love sport, period."

Nice touch in naming the city's sporting franchises, but what about DePaul athletics?

About New York City -- well, more specifically, Long Island -- ahead of the 2012 Barclays at Bethpage Black: ""It's a great sporting town, to begin with, and they come out in droves. Hopefully, we'll get some good weather, unlike the last time we played there (the 2009 U.S. Open)."

Being a California-born Stanford man, buttering up San Francisco makes some sense. From 2006: "You know, overall, San Francisco has just been a great sporting town. I went to college there in the Bay Area, and so definitely witnessed it firsthand.  Especially back when I played in college, it was at old Candlestick watching the games there, it was always loud and raucous; the Raiders are there now. And I think just overall, it's just a great sporting town that came out and supported the event and to have John Daly up there in the playoff [at the WGC-American Express Championship] I think just added to that atmosphere."

"Boston is an awesome sporting town. It was an electrifying crowd. There were so many people that came out to support this event. We as players certainly appreciate that."

Just kidding. That was Phil Mickelson after he won the 2007 Deutsche Bank Championship.

If you're still feeling special, Philadelphia, to be included with the likes of the Big Apple, the Second City and San Francisco,  which all are great sporting towns, Woods has already complimented you on your "sporting town" status -- several years in a row.

When Aronimink C.C. hosted Woods' AT&T National in 2010 and '11 while regular host Congressional C.C. in suburban Maryland was preparing to hold the '11 U.S. Open, he laid it on thick.

In a 2010 press release: "I'm really looking forward to defending my title at the AT&T National. Philly is a great sports town, and I'm excited to play at Aronimink Golf Club."

A year later when he couldn't play: "[Philly] is an unbelievable sporting town. They came out last year and really supported this event and embraced this event, and truly embraced what we are trying to do for kids."

But Tiger wasn't found saying the AT&T National's current proxy host, Washington, D.C., is a great sports town. However, Greg McLaughlin, CEO of the Tiger Woods Foundation was more than complimentary after fans still came out last year following the derecho that nearly made the tournament unplayable.

"This week has been phenomenal. D.C. is such a great sports town, and the fans were awesome. They hung in there through the high temperatures and the storm. I can’t wait to come back in 2013.”

Then again, what's Tiger supposed to say? "::Insert city name here:: is a craphole inhabited by nothing by losers. I can't wait to leave."