A lot of middle-aged men are harassed by their wives about their golf habit. Some wives (and, heck, some husbands) probably think their spouse loves golf more than sex. There is no mistaking what PGA Tour player Kris Blanks values more. Hint: It's sex.

Blanks missed the cut by a shot on Friday at the John Deere Classic for his fifth missed cut in his last six starts. He took to Twitter to vent to his followers and complain, as he has been, about the cruel golfing gods. 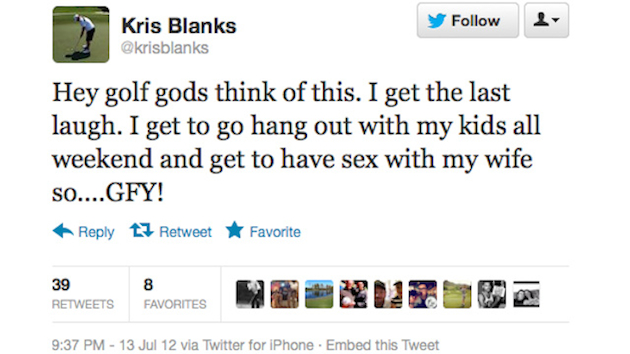 "Hey golf gods think of this" he said. "I get the last laugh. I get to go hang out with my kids all weekend and get to have sex with my wife so....GFY!"

At 4:00 p.m. on Saturday, Blanks deleted the tweet, some 18 hours after sending it. A number of sites picked up on the mini-tirade, which translated into a small boon in his follower count, so he's got that going for him. Which is nice. And the sex with his wife. Also nice, I presume.