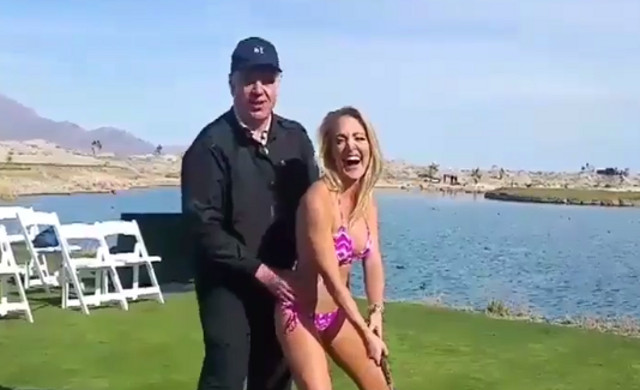 The best thing actor Christopher MacDonald did was play the role of Shooter McGavin in "Happy Gilmore". More than 20 years later, he's still got more pull as the king of the Tour than as his own self.

There's no better evidence of that than this video, posted by comic Kate Quigley. Quigley, and videographer-slash-comic Jenn Sterger, were in Las Vegas for a $10 million hole-in-one challenge that aired on a new website, URshow.tv, and included a cameo by Rocco Mediate and Blair O'Neal. PGATour.com's Amanda Balionis was on-hand, too.

MacDonald, or Shooter, or both, was giving the bikini-clad Quigley a golf lesson about how it's all in the hips, even though everyone knows that lesson should only ever be given by Chubbs. Only Chubbs. And we'll leave that easy pun out there. Sterger went with the "happy place" joke, which is just as good. However, it definitely got awkward toward the end. Probably should've wrapped that up a whole lot sooner, Shooter.