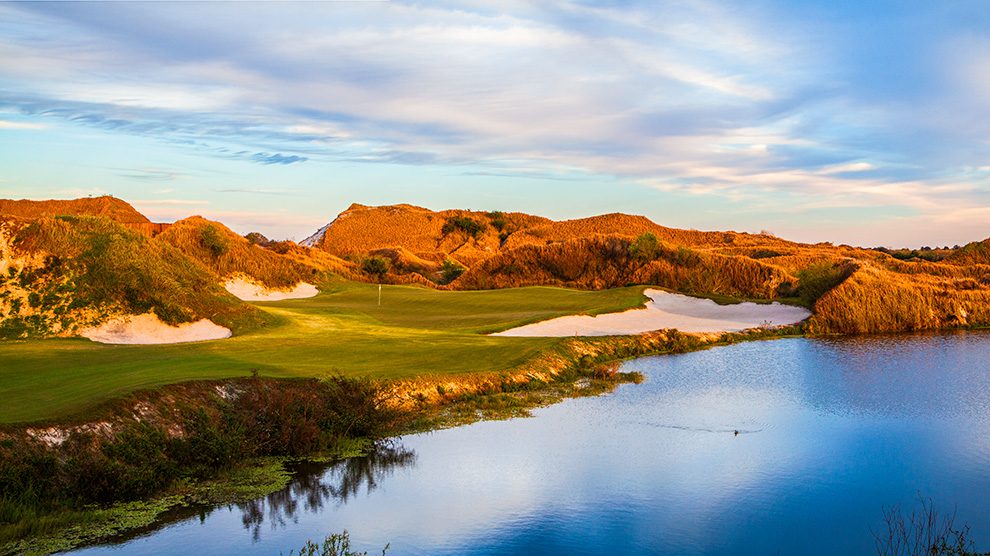 No. 5 on the Red Course, designed by Bill Coore and Ben Crenshaw, at Florida’s Streamsong Resort (Photo by Brian Oar)

Six one-putts in a row. That’s what he made.

Under tables and chairs and through the legs of poker-playing madmen antagonizing him with cheers against his beloved Patriots. Yet like the Bengals on that night, the boy’s opponent stood no chance. There would be no comeback — not by Cincinnati, not by the old man. Like his hero, No. 12 Tom Brady, the 12-year-old modestly put the game away. And like Richard Sherman in the Super Bowl, his dad accepted defeat with a handshake. Game. Over. The boy was offered a drink and a cigar. He wisely passed on both. Bed. Time.

That’s what happens at Streamsong. That’s what happens in a clubhouse so cool they have holes actually cut into the floor of their Albatross Lounge — a billiards, poker and first-class “man cave” reminiscent of the famed Bunker Bar at Bandon Dunes on the other side of the country.

Outdoors, someone forgot to tell Streamsong that Florida is flat. That same person forgot to tell North America’s southernmost golf mecca that Florida golf courses are also supposed to be crowded and surrounded by houses. Too late now. Not only is Streamsong flourishing despite those “oversights” — with 36 naturally wild and expansive holes from the minds of Tom Doak and Bill Coore/Ben Crenshaw, but there’s another 18 on the way courtesy of Gil Hanse.

You could say that Minnesota’s Mosaic mining company is going somewhat retro with its central Florida resort plans — circa 1989. That was the year Hollywood and Iowa made famous the “If you build it, they will come” mentality with “Field of Dreams” — and for 25 years now people have flocked by the thousands to visit that Midwestern baseball diamond completely surrounded by cornfields.

That bodes quite well for Mosaic’s $80 million (plus) investment in Streamsong — for a number of reasons. Florida has a little more drawing power going (until Disney opens a theme park in Des Moines anyway) and visitors to these modern golf “stadiums” will find perks beyond photo ops and corn-y souvenirs.

Better yet, these tracks aren’t seasonal — they’re perfectly primed for year-round appreciation. People are coming — that’s for sure — and Streamsong keeps giving the golfer more to come for. First, two courses. Next, an impressive hotel. And, soon, yet another course.

For many golfers, this is their dream come true.

Those who would argue that Streamsong is a little too remote are missing the point. Plus, they’re not exactly the resort’s target audience. Streamsong appeals to the game’s purists — those with Ireland and Scotland on their bucket lists, players who love the good walk rather than the comfortable cart.

Streamsong is intended to be another Bandon Dunes, another Prairie Club — it’s a destination, not a pit stop. Truthfully, this resort is far more “urban” than either of those model rural facilities — basically only an hour’s drive to Orlando or Tampa whereas the trip to a “big city” from Bandon or Valentine, Neb., will take you three or four hours minimum.

Nevertheless, Streamsong was designed as a retreat, an escape from the madness, an oasis for thrill-seeking golfers. Those who have been here find little or nothing to critique — and plenty at which to marvel. The accommodations defy belief, whether you stay in one of the 12 Clubhouse rooms or at the 216-room Lodge. The dining is sensational, the settings sublime. And the golf is diverse, challenging and minimalist to the max, a philosophy at which both design teams have excelled over the years, from Doak’s highly-honored Pacific Dunes in Oregon to Coore-Crenshaw’s much-heralded renovation of historic U.S. Open track Pinehurst No. 2. in North Carolina.

"We want to let the land tell us what to do,” Crenshaw says of their designs.

Streamsong must have had a lot to say.

Personally, I’d opt for the Coore-Crenshaw Red Course if I could only play one — (but, seriously, who is coming to Streamsong to only play one course?) — and, yet, management could shuffle the nines or rearrange the routings and golfers would never know who did what or what went where. There is that much shared excellence and similar conceptual magic between the routings. It’s obvious the two design teams worked closely together, pairing and comparing visions to create a cumulative yield.

The non-golfer is equally rewarded at the resort with clay shooting, bass fishing, archery, a full-service spa, salon, lakeside infinity pool and a surreal, serene, starry-sky ceiling (most nights) at Fragmentary Blue’s spectacular rooftop lounge. Add in wings and a custom-made chocolate shake from Restaurant Fifty-Nine (if Jessica is working) or a meal at SottoTerra, the 2014 Golden Spoon Award Winner for “Florida’s Best New Restaurant,” and absorb the sensory pummeling of central Florida’s coolest hot spot. Or hottest cool spot.

But golf is the centerpiece by design, and step-by-step Streamsong emphasizes the truest of tee-to-green experiences. That’s the subliminal way of saying these courses were built to be walked, to feel the sandy base shifting beneath your feet and value every shot that much more. If a 12-year-old can walk 36 holes, carrying his own clubs, on a hot day (and break 100 both times), so can you. Riding carts are optional seasonally (at select times of the day), but pushcarts and caddies are always ready and available if you don’t want to carry your clubs. The general philosophy here is that “carts detract, caddie’s enhance.”

The Red Course has bermuda fairways that weave through sand dunes and lakes and ramble across open swaths of savannah. Tom Doak’s Blue Course accentuates the property’s elevation changes more and showcases more lakes, deeper bunkers and a slightly sterner test of most games. Each course has a handful of “out of this world” holes, but none are more jaw-dropping than the Blue’s No. 7 — a downhill lake-carry stunner you’ll want to play again and again, no matter what score you make on the first swing.

Some places take decades to achieve the national acclaim and success Streamsong has attained in just a couple years, which has to be encouraging for the development of the new Black Course, scheduled to open within the next two years. “This place is already great,” General Manager Richard Mogensen says. “But we’re making it even greater.”

Considering 85 percent of this 16,500-acre golf mine remains untapped, it would seem that statement is likely to be gloriously validated.

Eat, Drink & Fun: At a destination club like this, you’re probably never leaving the property for food or drinks ... or anything else. Dine at Restaurant Fifty-Nine, P2O5 or SottoTerra and hang out at the rooftop Fragmentary Blue until bedtime.

How We’d Do It: Stay at least three nights in the impressive Lodge, play each course at least twice to get a full appreciation of the mastery at work. And do some fishing or clay shooting in your “spare” time, if you can pull yourself away from the courses.

Eric N. Hart is the Family Travel Editor for GolfNewsNet.com and freelance golf journalist writing for multiple regional and national publications — and specializes in exploring the world with his wife and children in tow. This story is part of his ongoing series exploring Family Fun Golf Resorts in Florida.